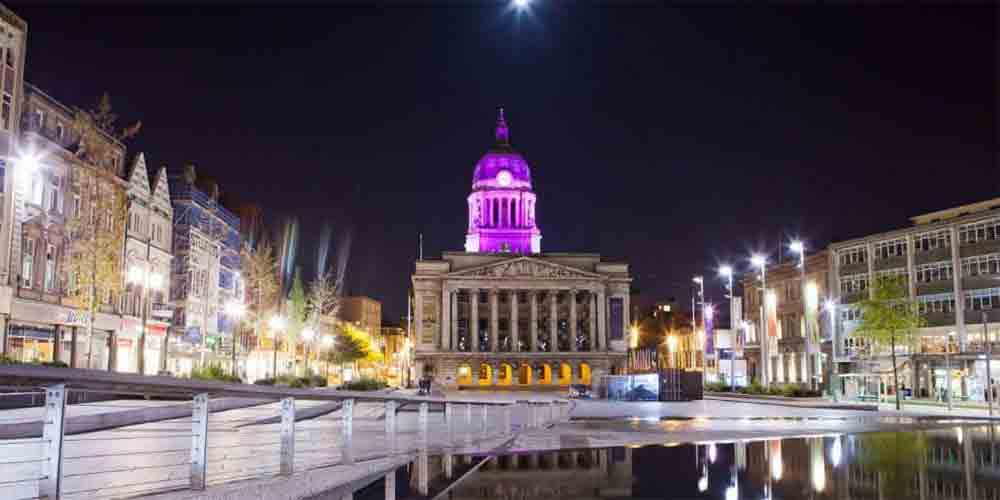 Located 130 miles from London, just over 80 miles to Manchester and 53 to Birmingham, Nottingham is a perfectly placed city.

The population of Nottingham and its suburbs currently stands at around 730,000. The region’s population has grown at just under 2.3% over the last two years. Nottingham has the largest percentage of 16-24 year olds in the country, primarily due to the city’s two universities.

The property market in the district is very encouraging, with the cost of residential property currently at around 18% below the national average.  With rises of just under 3.8% in the last year, and by around 11.4% over the last five year period, the trend looks likely to continue.

£3.5 billion of public and private funding is being poured into transport, infrastructure and major construction projects.

As well as the redevelopment of many business sites and zones there’s £750 million being spent on creating an integrated transport hub, including tram and road improvements, as well as establishing ultra high-speed broadband.

Employment figures across the region are also very positive, with unemployment having fallen by an impressive 16% over the last year. This is excellent news, especially when taking into consideration the high student population of the city, which is in the region of 61,000.

Recent research shows that the University of Nottingham is the best for finding graduates, according to the UK’s top law firms and investment banks, with Nottingham’s students being most targeted by graduate recruiters.

In 2005 Nottingham was made one of the UK’s six ‘science’ cities. So Nottingham property investment is ideal for you if you're looking for property in a major city that's leading in a high-growth industry.

Famous local businesses include such household names as Boots, founded there in 1849, and who still have their headquarters in Nottingham, as do Raleigh Cycles, Center Parcs and Vision Express. Other large companies employing here are Experian, Artex, Capital One, Agrovista, John Deere and Courtauld textiles, Pork Farms, EDF Energy, Loomis, Machine Mart, Pedigree Petfoods and Wilkinson.

Nottingham has confirmed its place at the head of the UK’s life science community, with the announcement of a new life science incubator to be built on brownfield land adjacent to the existing BioCity. The 50,000 sq ft centre, described by the developer as a ‘landmark building’ will provide space for growing bioscience companies including SMEs.BioCity currently houses around 80 science-based companies and is the UK’s biggest bioscience innovation and incubation centre. BioCity is a joint venture between Nottingham Trent University and the University of Nottingham, it employs over 500 people and has a 91% business survival rate within it.

£3.5 billion of public and private sector investment is currently happening in and around Nottingham.

Nottingham has one of the most exciting development schemes in Europe underway. This includes expansion of major companies like E.ON and redevelopment of sites such as Boots HQ, MediPark and Beeston Business Park.

Also due for completion are lines 2 and 3 of the £570 million award-winning Nottingham Express Transit tram system, which will seamlessly link the town’s rail, road foot traffic. The complex project employs around 1,500 people and involves laying some 36 kilometres of track. The Southside, Eastside and Waterside zones and the two shopping centres are also in the planning stages of massive redevelopment.

Air: The East Midlands Airport is located just under 15 miles south-west of the city. Journey times by car are in the region of 40 minutes. Birmingham Airport is just under 50 miles and about 1¼ hours by car.

Trams: 2004 saw the reintroduction of trams to the city, running throughout the centre and linking with the park-and-ride adjacent to Junction 6 of the M1. Extensive improvements and additions are due for completion in 2015.

Road: Nottingham is close to both the A46 and A52 main road routes, as well as the M1 Motorway, linking the region with London and Leeds.

Bus: Nottingham has the largest public bus network in the UK, with the majority of services being operated by Nottingham City Transport.

Notable institutions include Nottingham High School, which caters for pupils aged 4 – 18. Formerly boys only school, but becoming co-educational from 2015. Recently ranked by Ofsted inspectors as the 36th best school in the country.

The city’s Talbot Street is set to become the heart of the student quarter with the redevelopment of Talbot House. This will provide 434 new student bedrooms of varying layouts and laundry rooms, communal areas, a reception, offices and a gym.

Shopping & Dining: Shoppers have the choice of the Victoria and Broadmarsh Centres, as well as The Exchange Arcade, Flying Horse Walk and others. All the familiar high street names have department stores here and Hockley Village has many alternative and independent shops. The area around Bridlesmith Gate has numerous designer shops and the various alleys and side streets are always worth a look for their many unique speciality shops and antiquities. Nottingham has several hundred restaurants, from small street cafés all the way up to AA rosette-winning restaurants. City centre Iberico World Tapas was awarded the Michelin Bib Gourmand in 2013.

Sport & Culture: Sports fans have a wide selection of gyms and outdoor venues. Whilst spectators can be kept happy with football, rugby and cricket. There are two large capacity theatres in Nottingham, as well as the Broadway and Savoy cinemas, along with an excellent selection of art galleries and museums including Nottingham Castle. Nottingham Arena and Rock City are two excellent live music venues that regularly host major artists. Two music festivals take place in the city every year.

Green Spaces: There are 136 parks and gardens across the city, they range from large tourist attractions through to smaller neighbourhood parks.

What Do American Property Trends Mean for UK Property Developers?