Great Ducie Street, on Manchester's city centre fringe is about to experience regeneration. Manchester is a centre for professional, financial, business, and hospitality services. It has enjoyed an elite status as the Second City for its economic success. The city is a top destination for business and trade, as well as for culture, sports, and leisure.

But all that changed when the second wave of  Covid-19 began in September 2020. The city centre and Greater Manchester saw some of the highest rates of COVID-19. Because of that, Manchester faced very strict lockdown regulations.

Many neighbourhoods in Manchester could not cope with the sudden economic closure. Compared to other cities in the UK, Manchester was ill-prepared when the pandemic hit.

As a result, visitors and inward investments stopped. Consumer spending became limited. Commuting into the city stopped. Travel was impossible. Mancunians suffered greatly and so did their economy.

Thankfully, the strict lockdowns ended, and Manchester has slowly regained its footing. One key factor in regaining its status as an economic powerhouse in the UK is regeneration. Especially in the city centre and its fringe areas.

The city centre and Greater Manchester are working overtime to drive economic growth. The local councils are working hard to restore their pre-Covid economic success.

And Manchester’s tech, professional and scientific sectors are helping drive growth. To support these sectors, regeneration in areas like Great Ducie Street is vital.

The regeneration's commercial and residential projects will also support major investments and startups. The commercial developments in the area include spaces for business and professional services. They also include starter labs and incubators for startups and collaborations.

These services contribute a GVA of £15.5 billion. Furthermore, they provide more than 270,000 jobs. Manchester and Greater Manchester's residents enjoy these jobs. As well as the talented workforce that commutes into the city from the surrounding areas.

In fact, Manchester is second only to London for the quality of its professional services. This reputation attracts both domestic and international major investments. They help make Manchester's post-Covid 19 recovery possible.

Commercial Expansion And Major Investments The Keys To Manchester’s Growth

And as with many large UK cities, the city centre is the primary workplace. It's not different for Manchester.

Many of its residents and those living within Greater Manchester work in the city centre. It is the primary city in the North where major companies move or open their headquarters.

The city region's economic success comes from the development of a diverse economy. Its modern economy relies on the backbone of professional and financial services. But it is also known for its hospitality and leisure sectors. And much of its recent growth and success comes from its creative, digital, and tech sectors.

85 Of The Ftse 100 Have Offices In Manchester

Manchester’s GVA of £71 billion makes it the second-largest UK economy outside of London. This attracts both domestic and foreign direct investment. 40% of the businesses in the North West are located in Greater Manchester.

There are over 105,000 startups and local businesses in the city region. There are also over 125,000 domestic and international companies with offices there. Many of these call Manchester home: BBC, Siemens, ITV, Google, Amazon, Kellogg’s, and many more.

Furthermore, companies with headquarters or major regional offices in the North West, include: 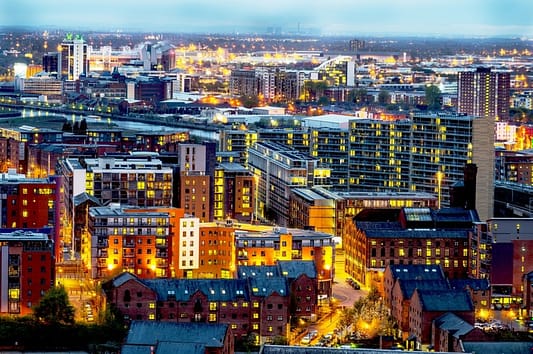 Manchester's creative and digital sectors are leading the way to economic growth. These sectors contribute to the Manchester economy with a GVA of over £3.1 billion.

Both sectors provide more than 64,000 jobs for the city region. These sectors also raise the demand for housing. That's where the Great Ducie Street regeneration comes in.

It provides professionals and staff with the best possible accommodation. It is close to the creative and digital hubs around Manchester and Greater Manchester.

Music, Film And TV, And Digital Design And Production Lead The Way

Manchester's creative sector started in the mid-1990s. It was a young industry then. But things were looking up. The development of MediaCityUK in Salford Quays started in 2007.

It attracted  creative and digital companies and startups that set up shop in the area. The relocation of BBC, ITV, Channel 4, Mediacom, Brown Bag Films, and other TV and film productions into the city region enabled growth and success.

At the same time, the digital sector started to gain traction. The Sharp Project and Space Studios are two of the companies that led the way for the creation of a digital sector.

The creation of the sector was also supported by the knowledge and the R&D quarters. They collaborated with Manchester's schools and universities to develop innovative tech and applications.

Economic Sector Overlaps Are Taking Manchester To The Next Level

That’s not all. Sector overlaps are making Manchester even more attractive to investments.  In particular, the overlap between the creative and business and financial services sectors. This overlap creates opportunities to provide customers with innovative products and services.

Another overlap is the combination of creatives and new developments in technology. Collaborations like these attract technology and innovation-driven companies and startups. They drive Manchester's economic growth higher.

Not only that, but these overlaps make Manchester’s economy diverse and attractive. They attract a wider range of companies looking to invest in the city. They also make the city region a source of highly talented graduates and professionals.

Which make Great Ducie Street's central location a bigger draw. It is close to the business and office quarters in the city centre. It sits on the city centre fringe and very close to Manchester Victoria train station.

From the Victoria station, it's just a ride away from the Northern Quarter, home to Manchester’s vibrant creative, music, and cultural scene. Wait a while and you can catch the rail to the creative and digital sectors like MediaCityUK in Salford.

Manchester’s local government  were criticised for their slow response during the pandemic. But they have turned thing around. They have certainly taken the opportunity not to make the same mistake with the city region’s economic turnaround.

The city region is now busy developing areas that would attract major investment and employers. And they are making sure that these regeneration projects are are spread all over, not just in the city centre.

Salford is currently undergoing a highly successful regeneration. This development includes the Salford Quays, as well as the surrounding areas. It has successfully turned Salford Quays into a prime leisure and shopping destination.

The Castlefield regeneration is centred mainly in residential property investment. It is making the most of being surrounded by solid property fundamentals. Not to mention idyllic and open surroundings that are both peaceful yet vibrant. It is close to major business and investments and employers in the city centre. It is close to the city’s top shopping centres both in the city centre and along the fringe.

As the UK’s first urban heritage park, Castlefield has many parks and leisure facilities. It is also within walking distance are schools and universities. These make it the perfect urban living location in Manchester.

Great Ducie Street is close to the business and office quarters. It is in close to many shopping centres and leisure locales in the city centre and in Greater Manchester. It is not far from the North Quarter with its cultural, live music, artistic and visual attractions.

This proximity is what makes Great Ducie Street a commercial and residential hotspot. It is where future collaborations will be made. It will become a favoured city address for shops and leisure centres. And its residential spaces will help meet the demand for housing close to the city centre.

The key objective for the city and local councils to undertake regeneration projects like the one in Great Ducie Street is to help push the regions economic growth. These projects are also expected to support the rising need for residential accommodations as the influx of professionals coming to the city also increases.

Delivering high quality new build property investments is essential. It addresses the city region’s need for safe, secure, accessible and affordable accommodations for residents and professionals, and students. It helps the local councils balance between commercial development and providing residential accommodations for its growing population.

The Great Ducie Street regeneration project will answer this need for housing, and because of its proximity to solid investment fundamentals, will be an attractive investment hotspot for new build property.

The pandemic crushed Manchester and Greater Manchester. Its key economic sectors suffered from the loss of foot traffic and visitors and its business and office, as well as its tech and creative sectors had to scramble to ensure the region and its residents would not be crippled by the crashing economy.

Thanks to the local councils’ emphasis on economic growth and regeneration projects like Great Ducie Street, the city region (the city centre and Greater Manchester) is doing an amazing economic turnaround. For the Second City, there’s no way but up.

Chat with our team today or call us on 02079236100 to learn more about the off plan and new build property investments brought about by the Great Ducie Street regeneration. We can help you learn the strategies that can give you the confidence and certainty to invest in areas with solid fundamentals.