When will London house prices fall?

House prices in the UK ebb and flow constantly

A friend of mine struggled to buy his home in the late 1980s. He told me that his father had faced a similar struggle in the early 1970s.

One of the common factors in both cases is that property prices were said to be too high at the time. Youngsters “will never be able to afford to buy their home.”

In this post I’ll look at the reasons why property prices are so high, and why they’ll probably continue to go up over the long term. You’ll also discover the real reason why house prices in the UK took a tumble in the late 1980s, and again in 2008/9.

A lot of very reasonable commentary centres around supply and demand when explaining why UK house prices just keep on rising. Without a doubt, this is a major factor.

The population in the UK has increased from around 55 million in 1970 to 65 million today. The ONS expects the population to grow by another 10 million by 2039. These extra people will need housing. Recent estimates put this need at around 220,000 new homes every year. Only half this number is being built.

However, while undersupply and growing demand for housing will underpin the property market in the UK, there are other factors that need to be considered when figuring out why property prices are so high. Understanding these helps when determining where we are on the property market cycle.

The government loves people to own their homes

Whether socialist or capitalist (labour or conservative), successive governments have welcomed rising property prices. In fact, they have encouraged them through some of different measures. Rising house prices make people feel good. When people feel good, they vote for no change.

In the 1980s, Margaret Thatcher’s government made it easier for people to buy their home by selling off council houses at big discounts. Today we have a multitude of government schemes that are helping to keep prices bubbling at the lower end of the market. These schemes include:

Banks can create money from thin air (it’s called fractional banking). When they do, they lend it. Borrowers pay the banks interest on their loans, and bankers receive bonuses based on this income. The more money the bank lends, the more profit it makes.

In the recent past, this desire for extra profits from loans led the banks to make some rash lending decisions. If you’ve read the book ‘The Big Short’ by Michael Lewis or seen the film of the book, you’ll know those bad lending policies included making sub-prime loans. These were loans that simply shouldn’t have been made, to people who couldn’t afford them. When these loans are imploded, banks were forced to cut back on their lending.

So when will house prices fall?

The last two major pullbacks in the value of the UK property market have coincided with banks having their ability to lend slashed.

After the stock market crash of 1987, the amount of capital that banks had available to support their lending collapsed. They simply had to tighten their lending policies. Few mortgages meant fewer people were chasing homes.

After the Global Financial Crisis of 2007, banks received tens of billions in taxpayers’ money to prop them up. Again, their ability to lend was severely restricted. Gradually, these restrictions were relaxed, and banks started extending mortgages. The Bank of England did its part by cutting interest rates.

The property market has recovered. Where demand for homes has outstripped supply – and been supported by government policies that aid homebuyers – prices have moved above their previous levels. Just as they have done previously. 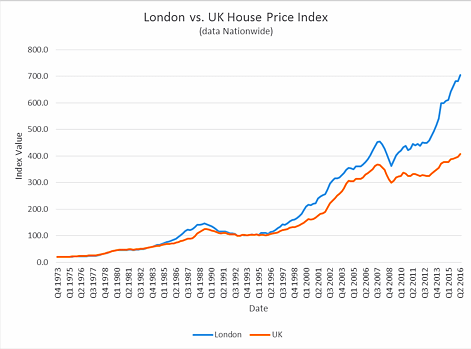 House prices in the UK will fall. They will rise. Markets do that. In the long term, an investment into a quality property in an area that is benefitting from infrastructure spending and regeneration is likely to perform better than average. In the short term, blips in market values caused by the emotional response to events like Brexit creates opportunities for savvy property investors to negotiate below market value property deals.

If my friend hadn’t bought his home in the late 1980s and his parents hadn’t bought theirs in the early 1970s (both when they could barely afford to do so), neither would have made an investment that beats all others.

Do you think London house prices will fall?

When do you think property prices in the UK will fall permanently?

Get in touch with the Gladfish Team today on +44 (0)207 923 6100 and you could join thousands of other investors who maximise their return on investment throughout the property market cycle.