Finally we have some clarity on the Cladding debacle that has costs thousands upon thousands and hours of stress and worry. 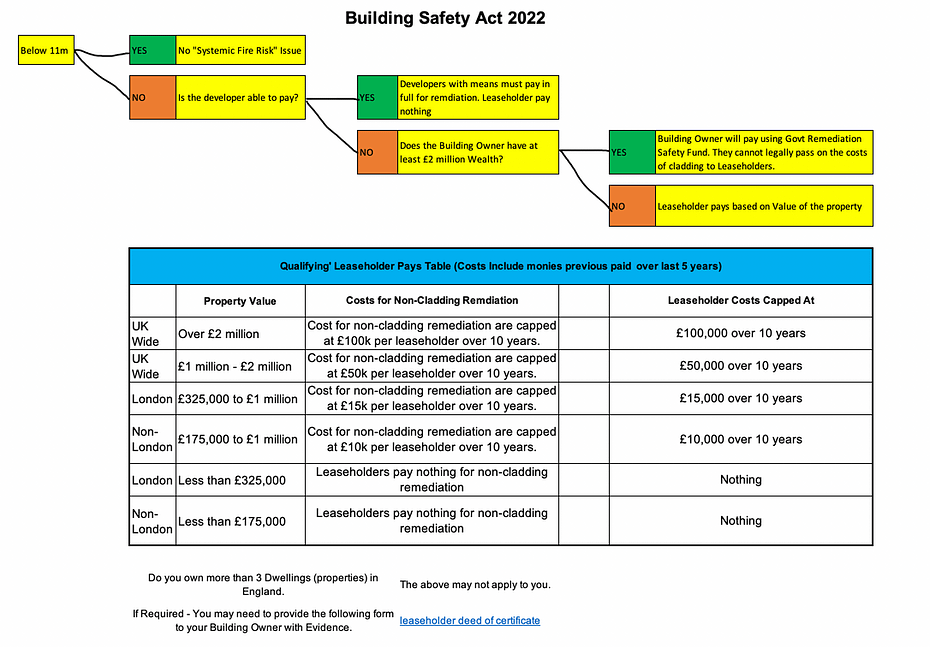 So welcome guys and finally got a cleaning update. And actually, finally we got some resemblance of a path. And I mean, it's five years, it's disgusting. It's taken this long, and the amount of wastage with waking watch and all this sort of stuff, you know, just had no clarity. But anyway, so they've seemed to have come out with Well, what's called the building services, building a building safely act 2022. And it gives clarity now I've read a have a read through it, don't bother doing it. It's not that interesting. But basically, what they're saying is, hey, we've got this opportunity, we can see we've done some things well, no, they'll never admit they've done things wrong. But in the past, you know, things have been done wrong and not to standard. So we're going to retrospectively go back and fix all those things. Okay. So this is not just about cladding anymore, this Building Safety Act. This is about a whole broad range of things that potentially, yeah, our fire and effectively safety. Okay, so what is the important bit for you guys as investors is this is there is a bit of a structure, bit of a workflow. You can see it there. And what I'll do is I'll just take you through, so it all starts at 11 metres. Okay, now, forget about 18 metres. Okay. 80 metres was the original thing. But then, of course, mortgage companies started going no, we're not gonna accept that. So 11 metres seems to be where it is. And there is broad based support for this, because the uncertainty has been killing the industry. Yeah. So 11 metres. So is your building 11 metres or more is the first question. If it is, sorry, if it isn't, then there's no systemic fire risk. And there's no issue. Yeah. So in other words, nothing's going to be done about it. The problems of the past are the problems of the past and not even looked at. So from that perspective, there's nothing to be done. Yeah. So there may be some other stuff that they'll bring in that there is the possibility in the Building Safety Act. But for cladding, nothing, okay. So cladding is 11 metres above, if there, if it is 11 metres above, then is the developer able to pay to remedy it? Okay. So that's the next question, then question after that is, okay, if the developer is able to pay, then it's within their means, then they must pay the full remediation. Okay, leasehold was the pay nothing. Okay. And that's written into the legislation, right? So if they don't have the ability to pay, then does the building owner have a 2 million or at least 2 million net worth? Okay, so then we I personally at that, you know, that entity would that owns it, okay. So if they do, obviously, if they do have 2 million or more, then the building owner will pay, but what's going to happen is the government will put the bill upfront, and then they will basically pay it off over the next 10 years.

Or pay it back make contributions. So that's pretty much how it is, it's a guarantee a safety fund they're putting together. So I mean, this is great, because it means things can be done a lot quicker, it's still going to take ages, because we still don't have people I mean, Brexit killed off most of the people that are going to build these things that are fixing these things. So there's still going to take a while it's going to be with us for the next 510 years. Who knows, you know, we're now at 11 metres, not 18 metres. So that probably brings in another however many buildings, okay. Now, if the building owner doesn't can't pay, doesn't have at least 2 million bucks net worth, then what's going to happen is effectively the lease holder pay based on the value of the property. All right. And what that means now is that there's actual table here, and it depends whether you're in London, okay? Or UK. Alright. So basically, if you've got over 2 million UK wide costs of cladding non capped at 100,000. So this is if the property values over 2 million, okay. Then 100,000 is what your contribution will be over 10 years. All right. So, you know, 100,000 bucks over 10 years is what you would be capped at paying, you won't have to pay any more than that.

If it's UK wide, okay, one to 2 million. All right, that it's 50,000 over 10 years. All right. So at least now you can sort of go well, actually, my property's worth 1.2 million maximum might have to pay is five grand a year. Okay. So it does limit that which is good, because let's face it, we've had some bills in the 76,000 pounds where they've said you need to pay up. You know, here's the bill. It's just ridiculous. What's happened anyway. Okay, so if we look at London, okay, if you're in London, from three set 325 to a million, that it's 15 Over the next 10 years. Okay, so that encapsulates probably most of what we would normally sell,

175 to a million, it's 10 grand over 10 years, London less than 325. Okay? If you can find something like that, then there's nothing to pay non London less than 175 Nothing to pay. Okay? However, all right, and this is the real kicker, do you own more than three dwellings properties, okay? In England, okay. If you do, then the above may not apply, and you have to pay whatever the cost, whatever the share of costs are. All right. So that's if you own a portfolio, that can be sizable, because now what they're saying is, you basically, if you got if you're in three more properties, or three properties, one, three properties or properties or more, then as far as the government's concerned, you got the means to pay for it yourself. Whatever that share is, it's not limited. It's whatever the share is. Okay. So that is potentially a big problem. Now,

it's, you know, it's a hard one, that one, okay, because I think the couple of things that I've seen come out where people have to return and sign on the dotted line, and it's based on February 14, this year, okay, whatever the value was, or whoever the owner was, at that point.

So effectively what it means if you've sold a property, there's other rules, I'm not going to go into it in this video. But look, the bottom line with this is, let me come back on the screen. Bottom line with this is that you got a portfolio, you need to actually, you know, give us a call, and we can chat through it, and just work on and anyway, I'll be contacting you guys, a few of my clients over the next few weeks, just to discuss, we might have a few webinars and things like that. But it all depends on 11 metres or more. So that start with that. And then if obviously, if you're under 11 metres, you'd have to worry. If you're over 11 metres you start to maybe have to, but you will be contacted. And this is the problem is we can't find that information out. We're flat out trying to get ahold of property managers now building managers and lease holders and so freeholders, so you got to wait until they'll contact you, they'll contact you through their normal ground and service charge means and effectively tell you, right, this is the situation, you know, you need to provide this document and effectively the document, you got to sign to say, you know how many problems you've got what's you know, blah, blah, blah, you know, there's a whole heap of questions there. You have to answer. And if you don't answer them properly, it's fraud. So there's all those sorts of threats coming out.

you're gonna have at least 50 grand per property 10 properties, that's half a million, that you're getting out. And actually, it doesn't matter what happens. Now, if you sort of sell it, because people are aware of this. They're going to take that into account. So it's not a case of I'll just try and get rid of it now. So yeah, so that sort of gives you a bit of an idea of where we're at with cladding. Good. There's a lot more clarity. But now it's Matt remains to be seen how lease holder so freeholders deal with the had they got the means to pay, had they got 2 million in wealth? If not, then they'll pass it on to the lease holders and share equally amongst the lease holders. And it will be cat of those lease holders do you own more than three properties because then you don't benefit from this. And then they can slug you for I mean, you've seen the stupid fees that they charge. So that could potentially happen again. So it's not the best resolution, but it is a decent resolution for a lot of people who have been worried about it. So you just need to look at how it affects your individual thing. And obviously, if you've got more than four or more properties, then you know, let's chat and let's have a let's work out a bit of a strategy. Not that there is a strategy about this, but let's work out what the exposure is to this. Okay. Alright guys, as always, any questions you've got send them in to me, you can just log on to glad fish.com or easy track.uk. And yeah, send any questions. I'm happy to record a video and answer anything for you. Alright guys, have a great day. See you later. Bye.

Read about more of our Predictions for Property Investors For August 2022.

If you'd like this and more updates, predictions, opinions on the UK property market, sign up and send us your questions and we'll be happy to record a video response with our thoughts.