Is property still the best investment?

In the UK, property investment is seen as the preferred route to wealth by most people. Even those who aren’t investing (home buyers) gauge their wealth by how much their house has increased in value. It’s the largest expenditure the majority of people make, and offers many benefits to investors. These include seven reasons why investing in property beats all other investments:

However, even given this unique set of benefits of investing in property, when prices have increased by as much as they have in the last few years and then start to cool down, you’ll want to know if property is still the best investment in the today.

In this article I’ll look at how London property prices are currently performing, the reasons why they are moving the way they are, and whether property is still the best investment.

Recent national and local press headlines – particularly post-Brexit – have lead us to believe that London property prices are falling. This simply isn’t the case. In fact, according to actual sold prices as recorded on the UK Land Registry, over the last year there has only been one month in which the average house price in London has decreased.

Despite this real evidence, investor mentality has been swayed by headlines such as London house prices slashed after Brexit vote (Evening Standard July 1st, 2016). I won’t go into the details of the unedifying misinformation contained within that article here (you can read my analysis in my article “Why property investors should never believe all they read in the newspaper”), but, needless to say, we’ve been deluged by calls from concerned property investors because of this type of sensationalist reporting.

How are London house prices really holding up?

The London property market has faced a number of headwinds in the last year or so: We’ve seen changes to the way that mortgage interest tax relief is calculated on property investment; UK stamp duties have been increased on second home purchases, with a 3% surcharge; and, of course, we’ve had the Brexit vote.

Looking at the London property market, we can see that prices rose strongly in March of this year and then fell back in April. This can be easily explained, especially when we look at the numbers of transactions.

The additional stamp duty was announced in last year’s Autumn Budget. Everyone knew it was coming in April this year. Consequently, buyers rushed to get deals done in March before they were affected by the stamp duty increase. There was a record number of house transactions concluded in the month (16,322). Sellers pushed up prices as demand soared.

Unsurprisingly, transactions collapsed in April, and prices fell too. It could be argued that the fall of only 0.31% was an extremely robust result. 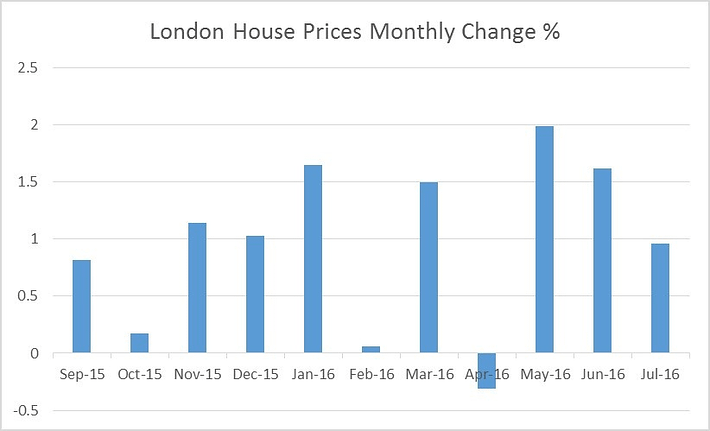 Turn to May through July, and you’ll see that London property prices are rising strongly, but the monthly rise is on a downward trend over the three months to July. Even so, the 12-month rise of 12.3% is a faster pace of growth than throughout the last quarter of 2015. It’s also a faster price growth than the average annual increase experienced between 1973 and 2015, measured by the Nationwide House Price Index at 8.8%.

What now for London house prices?

When examining the potential for London property investment, we’d expect a period of coolness as price rises revert to their long-term average. But we don’t foresee a collapse in prices.

One reason for this is that the fall in the value of the pound on foreign exchange markets has made London property cheap in foreign currency terms. Here at YPC Group, we’ve seen a distinct pick-up in interest from foreign investors, happy to be buying at even better value today than they were at the beginning of June. This should help limit any price damage from domestic post-Brexit jitters.

The fundamentals are extremely strong for London property

Property prices tend to move for a number of reasons. While short-term sentiment can cause sellers to drop price expectations and buyers to overpay, long-term property values are determined by property market fundamentals. And the long-term fundamentals underpinning London’s property market have rarely, if ever, been stronger:

Taking this last point in particular, the Greater London Authority conducts regular population analysis. Today the population of London is around 8.75 million. This is forecast to grow to 10.8 million in 2041. These new inhabitants will all need housing. Demand for housing in London is already outstripping supply, but looks likely to grow even faster in the next two decades.

In a simple property market, values are driven by a simple supply v. demand scenario. We’ve already seen that demand is set to grow dramatically over the next quarter of a century.

However, the London market is more complicated. There is a large investor base, and often the dynamics that drive investor demand are different to the dynamics that drive organic demand. Investors are concerned with capital growth and rental yield. Their ability and willingness to invest is also determined by the cost of financing and the supply of suitable properties.

I’ve been around long enough to know that property prices don’t only go up. I’ve also been around long enough to say that the next few months could produce the kind of market that enables savvy property investors to buy quality product at real value. If sentiment in the market falters, then we could see current investors and homeowners seeking to take profits. That could give long-term investors the opportunity to negotiate very favourable terms.

Investors should remember that:

Finally, invest for the long term

For long-term investors considering investing in either London property or a FTSE 100 portfolio, here are four charts that tell their own story: 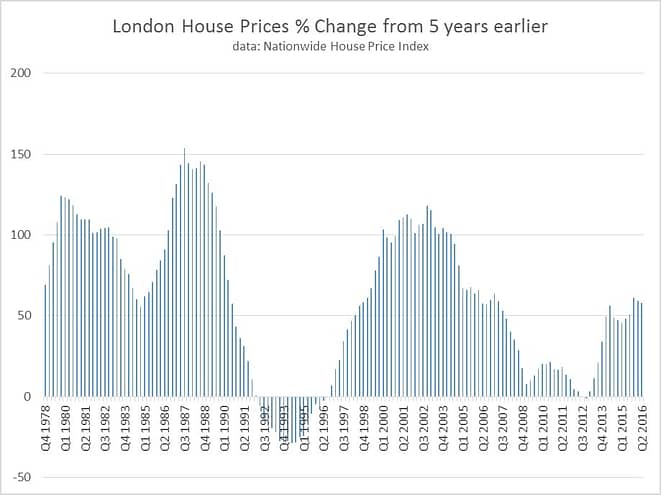 For long-term investors, London property is less volatile than the stock market, produces as good as or better income yield, and higher capital growth in the good times and lower and less frequent falls in value in the poor times.

So, in answer to the question “Given that the London market in particular is slowing, is property still the best investment?” I’d have to answer with a resounding, “Yes.”