Why do experts get it so wrong?

Have a look at the graph below, which shows the UK House Price Index between 1954 and the second quarter of 2015. There have been a couple of blips in the market–most markedly the early 1990s and 2007/2008-but overall it appears that the market has been on a gently rising curve for more than 60 years. 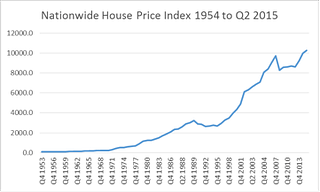 This, however, masks the incredible volatility of the housing market in this country. It is this volatility that can make or break the property investor, and this is best demonstrated by looking at the house price inflation data in graphical form over the same period: 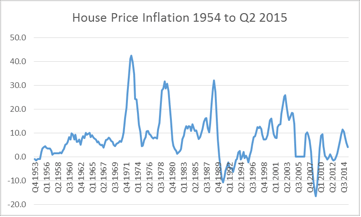 Consider buying a house in 1971, with house price inflation at more than 40%. You might be tempted to bid up for your property, in a desperate attempt to buy before the price is driven higher still. Soaring house prices might tempt you to overstretch on the financing, safe in the knowledge that in as little as three months you’ll be sitting on a nice profit. Then house price inflation simply falls away. If you’d made such a buying decision in 1989, when house prices were rising by 30% annually again, you’d have been even worse off a few years later, with prices suddenly and sharply falling.

Property experts make their house price predictions generally for the year ahead, sometimes for a couple of years. If they get it right, and you back their expert opinion, you could do very well, thank you. The problem is they very rarely do get it right.

I’m going to explain why property experts are so often wrong, and most of it is to do with the variables that affect house prices and create such volatility.

These are in no particular order of importance, mainly because the effect of each on house prices also varies.

When the economy is good and incomes are rising, people have more money to spend. It’s also the case that when the economy is strong and people are confident about their futures, they are prepared to commit more of their money to a new home or investment property. So borrowing increases disproportionately to earnings growth.

Similarly, when the economy goes into a recession, people lose their jobs, can’t keep up with the mortgage payments, and fall into arrears. Repossessions rise, and house prices are hurt.

When interest rates rise, which is most usually after a period of economic expansion, mortgage payments rise, too. Higher monthly payments reduce demand for new homes because the mortgage at current levels becomes less affordable. For property investors this is a double-edged sword: higher interest rates may make financing a property investment more expensive, but it also increases the attraction of renting (and the need, on a cost basis).

Generally speaking, the more sharply that interest rates move up, the more the possibility that house prices will fall.

Consumer confidence influences property investments through a range of factors, including economy, general inflation, and interest rates. When people feel more confident, they are more willing to take the risk of borrowing to buy a home. In this regard, if people expect house prices to rise, they will feel confident of taking on the mortgage debt to stoke their property purchase. When experts say that house prices are going to rise, it can be, at least for a period of time, a self-­fulfilling prophecy.

There aren’t many people, investors or home buyers, who have the cash to spend on a property purchase. The market, therefore, depends on the availability of mortgage financing.

In the run-up to the Global Financial Crisis, banks were falling over themselves to lend money. This led to loosened rules on lending. Banks loaned money to people who were already massively indebted or didn’t have the income to support the property purchase.

Loans of 125% of property value became commonplace. In America, this practice was further fuelled by subprime securities: loans between banks and finance houses which shifted the risk around, until everyone owned a slice of debt that relied on property prices rising higher and faster than ever before. Eventually, the market crashed, leading to the Global Financial Crisis.

Since then, banks and building societies have tightened their lending rules. Buyers need bigger deposits, and ‘self-­‐certified’ earnings are no longer allowed. Banks are less eager to lend to each other, too. Consequently, not only has it become more difficult to get a loan, but also there is less money being loaned (though the amount loaned did rise in 2014).

When builders build too many homes for underlying demand, house prices are likely to fall. When not enough houses are built, house prices are likely to rise. This is basic supply and demand economics. However, developers tend to build more when the market is strong, and if the market suddenly collapses as it did in 2007 through to 2008, there is often a glut of new properties left on the market, which the builders are unable to sell. This creates what is called a stock overhang, which further weighs on sentiment and prices.

6. House price to earnings and affordability

These are ratios that are used to measure the ability of people to buy a house.

The house price to earnings measures how expensive houses are in comparison to average wages. For example, the average household income in the UK is around £460 per week, or £24,000 per year (Institute for Fiscal Studies, March 2015). The average house price, according to globalpropertyguide.com, is around £183,000. So the house price to earnings ratio is now 6.7. This number is skewed heavily by London house prices, where the ratio is 9. The ratio in the north of England, for example, is only 3.2 (Nationwide).

Affordability is often accepted as a better measure of relative house prices and affordability. This is simply the amount of money spent on mortgage payments as a percentage of income. With interest rates at historic lows, this measure has fallen from its peak in 2007 when it was over 50% (as it was immediately before the house price falls in the early 1990s). According to Nationwide, mortgage payments now make up about 34% of household income.

As if all these variables aren’t enough for experts to contend with, there is also the fact that geography plays a major part in house price performance. Every area of the UK seems to have different economic dynamics, with localised inflation, earnings, and housing supply. Confidence varies greatly between the north and the south, as do house prices.

Debunking the myth of statistical analysis

Statistical analysis has become very vogue in some investment communities over the last twenty years. The idea is that it is entirely possible to ignore all the fundamentals – things like the economy, interest rates, and wages – and collect numbers only. These numbers are then collated, mashed up a bit, and a prediction is churned out with the aid of a couple of whizzy algorithms. All clever stuff, and very successful… until it goes wrong. Then the mathematical boffins return to the drawing board to come up with new calculations that prove why their first calculations were wrong in the first place.

Let me tell you, there is one underlying reason why this type of data gathering and extrapolation of numbers doesn’t work: the only thing that is truly predictable is the unpredictability of markets, and that includes property!

Let me give you an example of what I mean. Remember the General Election in 1992, when all the polls pointed to a Labour victory, even those conducted the day before the nation went to the voting booths. The Conservatives won an outright majority. Similarly, in 2015, all the opinion polls throughout the campaign said there would be a hung parliament. Come to the election, the Conservatives won an outright majority.

There have been many reasons put forward for the failure of the polling companies to correctly predict these results, extrapolated from tens of thousands of people asked which way they were going to vote. The truth is, even when given such a large data set to work with (more than 400,000 voters were polled during the 2015 General Election campaign), the final outcome is still largely unpredictable.

4 Best Cities to Invest in the UK

4 Best Cities to Invest in the UK