How will the UK property market perform in 2016/2017 after the Brexit vote?

UK property – is there still opportunity?

For any who invest in property, UK market dynamics since the Brexit vote is a big issue. Depending on who you speak to, which newspapers you read, and what ‘expert’ opinions are voiced the loudest, your views of where UK property prices are heading will probably swing from implosion to explosion: investors will either suffer a tragedy or a triumph.

Here I look at what was said before the EU referendum, what happened immediately after the people chose Brexit, and how the UK economy and property market has reacted since. This type of unbiased analysis might provide what is impossible to find elsewhere: a sensible idea of where UK property prices are heading during the remainder of 2016 and through 2017.

How can we assess the property market in the UK?

It’s impossible to analyse the property market without establishing what affects it. Our experience is that the fortunes of UK real estate – and, for that matter, the real estate markets around the globe in any country you care to name – is a localised issue. When you’re investing in property, you need to take your research down to the nth degree: property research is your guarantee to success as a property investor.

You need to examine local factors such as shops, schools, transport links, major employers and major investment. The strength of these, combined with the strength of the local economy, will determine how the local property market will perform in the short, medium, and long term.

Overriding these factors at the local level will be the national economy. However, by analysing the property market at the national level, you only get an overview of the general direction of UK property prices. Within this general picture there will be local differences, sometimes very marked. Take the following three markets as an example: 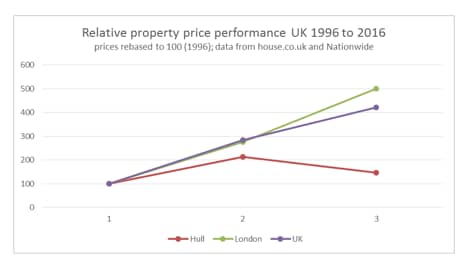 From this graph, which shows smoothed property prices rebased to 100 in 1996, you can see how property in different areas moves at different rates (and even in different directions).

When analysing the UK property market and making a forecast as to how property prices might move over the next 18 months to two years, we’re producing a ‘purple line’ prediction. There will always be regional variations.

Without further ado, let’s start our analysis of the UK property market by looking at the predictions made before the UK voted for Brexit.

Ahead of the vote, the Treasury warned that a vote for Brexit would cause house prices to tumble by 18%. Figures from both the Nationwide and Halifax showed that house price growth had slowed to its slowest pace for nearly half a year. Both bodies cited concerns over the EU referendum as the reason for this.

Zoopla said that Brexit would wipe out almost all the gains of the last five years. It said that many homeowners and property investors would be left in negative equity. Zoopla claimed that the entire UK residential property market would lose approximately £1.5 trillion of its value.

Other forecasters were less pessimistic. Mark Hayward of the National Association of Estate Agents expected prices and rents to remain stable, at least in the short term.

However, Knight Frank expected prices and sales volumes to fall moderately, although it hedged its bets by also saying that uncertainty could dampen the supply of homes and keep prices buoyant. Its analyst, Grainne Gilmore said, “In the short to medium term, the fundamental demand and supply dynamics are unlikely to change with a continued undersupply of homes across the country underpinning pricing in some of the most desirable areas.”

Post-Brexit aftermath – panic and pandemonium for a month

Within the first month after the Brexit vote, it appeared that many of the forecasts would be proved right. Within a few days, several property funds had closed to sellers. Headlines screamed warnings such as “Thousands of investors locked into plunging property funds as more investment giants rush to stem exodus in the wake of Brexit.”

Estate agents and property experts shouted from the rooftops that the market was doomed. Property developers pulled projects or mothballed them with immediate effect. Many said that the London market would be particularly badly hit. Analysts at Bank of America Merrill Lynch stated that they expected house prices to fall by 10% across the UK during the next 12 months.

In the three days after the Brexit vote, the FTSE 100 fell by around 7%, and sterling fell by around 10%. Moody’s, Fitch, and Standard & Poor’s all downgraded the UK credit rating. All had predicted a deep recession, as had around 90% of businesses, economic experts, government bodies, world economic forums, and so on.

Richard Branson, speaking before, during, and after the referendum, warned that Brexit would do ‘irreparable damage’ to the UK economy. He said the damage to the people would be enormous, and that Brexit would be the worst decision the British public could make. He predicted that half of UK exports that go to the EU would be sourced from elsewhere very quickly. In the immediate aftermath of the Brexit vote, Branson called for a petition to demand a second referendum, joining hundreds of celebrities urging the same.

Then something strange happened.

UK property prices haven’t plunged at all. What is clear now is that the slowdown in property price growth around the time of the EU referendum – particularly in London – was probably caused by other factors. We’d had changes to the property tax regime in the UK. Lower mortgage interest tax relief will hit higher rate taxpayer landlords over the next four years. Stamp duty has made investing in London property a little more expensive.

(Download our free Book “The Non-Accountant’s Guide to UK Property Tax”) to understand all the recent property tax changes and how they affect you.)

The British people, their businesses, and even politicians have adjusted rapidly to the ‘post-Brexit’ environment.

Investing in property in the UK suddenly got a whole lot cheaper for foreign investors. The fall in the pound has more than negated the stamp duty effect. Something very strange happened in the property market. Or, at least, very strange if you’d heeded all the warnings from all the experts pre-Brexit.

UK property prices are rising, and as fast as they have done for months. Here’s the proof from the UK House Price Index compiled from Land Registry data of all sold houses:

Even in London, the average price in July rose by more than 1% on the month and 12.3% on the year. Hardly the market that the experts were predicting at all.

It’s become clear that the government and the BoE are prepared to act to support the national economy. Investment in major infrastructure projects such as High-Speed Rail and Crossrail hasn’t been pulled. The government has committed to replacing any lost EU subsidies to a range of industries through to 2020.

Meanwhile, the pound has fallen by around 10% on foreign exchange markets. That has given our exporters a big boost. The economic forecasts of a widespread recession look somewhat wide of the mark.

Moody’s, one of the agencies that cut the UK’s credit rating immediately after the Brexit vote because it forecast that the UK would fall into a deep recession, has pulled back on its previous forecast. It now expects a slowdown, but doesn’t expect the UK to get anywhere near a recession.

Perhaps this is because the vote was just that – a vote. While it signals the probability of long-term change, nothing in the short term has changed. It should also be remembered that the process of leaving the EU will be measured and staged. While speculation, rumours, and sentiment may cause short, sharp shocks to the system, we think that the withdrawal process will be far more structured than many have previously believed. That will smooth the transition phase.

Meanwhile, businesses will continue to operate, look for new opportunities, and grow. They aren’t simply going to stop trading, pull plans for expansion, and withdraw into their shell. The UK is still the fifth largest economy in the world. It’s the EU’s largest single trading partner.

For investors in UK property, it now appears that the Brexit vote presented a short-lived opportunity to benefit from unfounded market panic created by an unwarranted pessimism among the great and the good. All talk of a recession has now faded, while since the Brexit vote economic data has revealed that:

The UK economy looks to be set on firm foundations. Businesses will adjust to the new economic environment and have already begun to do so. Demand for homes will continue to outpace supply.  However, foreign investors in UK property may find that the exchange rate price advantage that they have been handed by Brexit erodes over the coming months.

With this economic backdrop, while there will be regional variations, we expect UK property prices to continue to advance at a moderate rate. There are still hurdles that will need to be negotiated, and it may be that the Bank of England reverses its last interest rate cut sooner rather than later. Overall, though, we would suggest that property prices in the UK will be higher at the end of 2017 than they are now, while rents should hold up reasonably well.

To discuss Brexit, property markets, or your individual objectives for your property investment, give my team a call on +44 (0)207 812 1255.