We’ve witnessed it in London. Twice. We’re witnessing it in the North, on a massive scale. And we’ve seen it in the Midlands. Savvy property investors have made tens of thousands of pounds (and more) following the phenomenon. I’m talking about large-scale transport infrastructure projects:

These massive railway projects have (and are) completely transforming the economic fortunes of cities and towns along their routes. It brings business into the regions. It improves links for outward and inward commuters. Visitors, day trippers and tourists are more easily able to discover the rich diversity of Britain’s heritage.

In each case of such major transport infrastructure build, property investors have gained most by investing earliest. And just when you thought the massive build-out of the UK’s rail network had been finally and fully planned, another was confirmed.

The planned ‘brain belt expressway’ across South Central England, from Cambridge to Oxford, has a £7 billion price tag and promises to create a new economic powerhouse to rival London, the Midlands, and the North.

And right slap-bang in the centre of this new rail route is Bedford. In a recent article, I introduced you to Bedford as a property investment destination. In this article, I’ll introduce you to the benefits that could flow from the town’s position as the linchpin on the brain belt expressway.

What is the brain belt?

Connecting two major university cities, with, perhaps, the brightest brains in the country as a readily available workforce. Ideal for the creation of the powerhouse of 21st century technological industries.

How does Bedford fit into the brain belt plans? 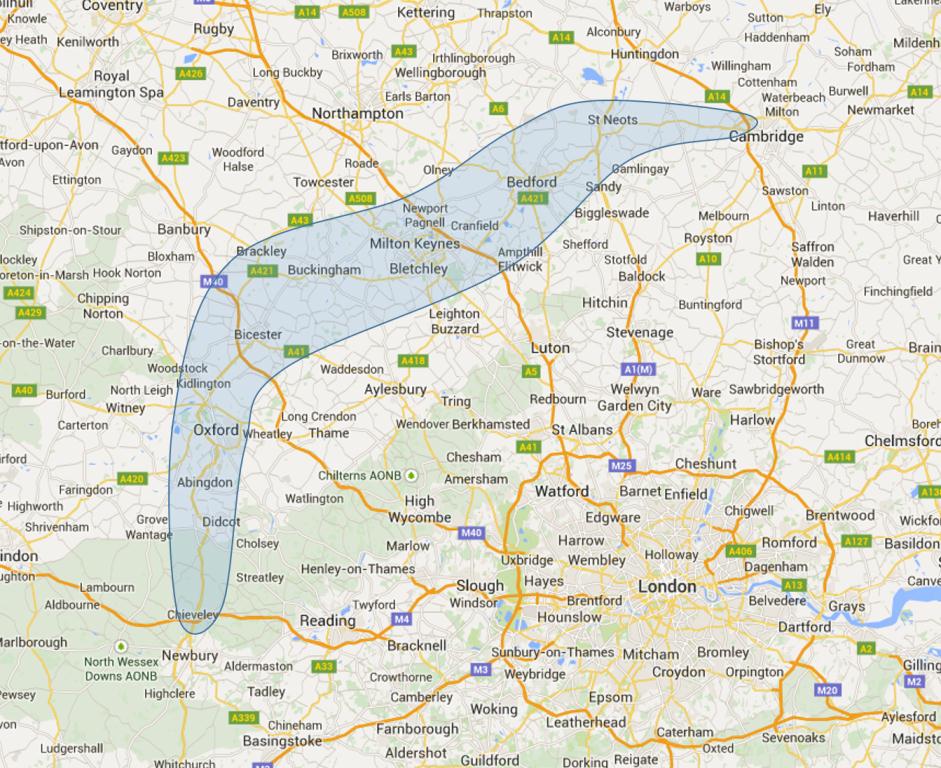 Bedford is at the heart of the brain belt, along both major road routes and the proposed rail route.

There will be a new station built here, where the previous Victorian station was flattened in the late 1970s. This will be the endpoint for the East West Rail Link (from Oxford). It is planned that the line will then connect through to Cambridge.

Lord Adonis has urged that the project be completed by 2030. New towns are earmarked, with hundreds of thousands of new homes to be built in the new powerhouse region. It should underpin economic growth here for decades to come.

Hundreds of billions could be added to the economy

The National Infrastructure Commission (NIC) has estimated that the investment in the brain belt will be rewarded many times over. Currently, the region produces around £90 billion towards the national economy. The NIC has forecast this will balloon to more than £250 billion because of the brain belt expressway.

The brain belt expressway should:

Bedford is at the heart of this region. A great location for its investment potential.

To learn more, contact Gladfish on +44 207 923 6100 and Book a property investment strategy session, and be among the first to discover our latest property opportunities in Bedford.

How the Market Backfired On These Tenants